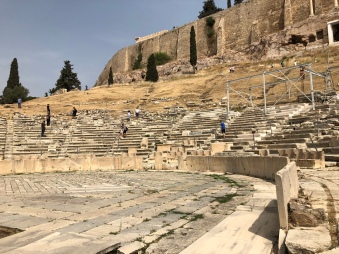 Waking up early in Athens, our goal was to explore the ancient sites. First stop, the Acropolis! The center of ancient Athens, the Acropolis has always been a scared place. While most know the iconic Parthenon, there are many other monuments and structures throughout the park. On the walk to the top, you pass two different theaters: the Theater of Dionysus and the Odeon of Herodes Atticus (left and right above). How can you tell the Odeon is Roman? The arches!

Even in early May before the tourist season really kicks off, crowds can get heavy at the Acropolis. I would recommend going early before it gets really hot and packed with tour groups, as you can see happening on the walk through the Propylaea (the gateway to Acropolis).

Here is the view of the grand entryway as seen from walking up the marble stairway. It’s not hard to imagine how majestic it must have looked in ancient times. 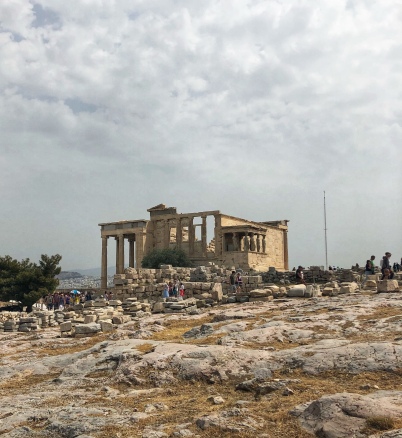 Remember the caryatids from the Acropolis Museum?Here are the reproductions standing proudly at the Erechtheion, a temple dedicated to both Athena and Poseidon.

Of course, the most iconic monument on the Acropolis is the Parthenon, the ancient temple dedicated to the Goddess Athena. Here I am in front of the scaffolding side (reminds me of being in New York!).

Here is the view from the less scaffold covered side. Even though many of the decorative elements have been pilfered over the ages, it isn’t hard to imagine how magnificent it must have looked when first constructed.

Around the base of the Acropolis are a plethora of historic ruins and sites. One that you can’t miss is the Ancient Agora. The Agora, translating to marketplace, was much more than a place where goods were bought and sold. This was a center of the city, a place for everything from religious festivals to philosophical debate. Here you can see the replica of the Stoa of Attalos, basically a covered marketplace. There are also statues of noted figures from centuries of use.

One of the most fascinating ruins on this site is the Temple of Hephaestus, the ancient god of the forge. What makes this temple so unique is how incredibly well preserved it is. 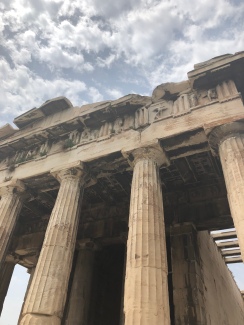 As you can see from these details, the marble friezes are remarkably intact. How did this happen? The temple was used throughout the ages as a religious site, becoming an Orthodox church around 700 AD. The last church service was held in 1833.

Various monuments and structures can be found throughout the site.

I know…this doesn’t look like Greek food! Walking down from Syntagma Square, we stumbled across Taqueria Maya, an adorable Latin food restaurant. Of course, I had to get a quesadilla, but this was with a Greek twist! By twist, I mean lamb. They also had refreshing and tasty margaritas.

As our first full day in Greece came to a close, we strolled through Athens, taking in the eclectic street art. Check back for more as we head to the Cycladic Islands.